Tishk International University’s vision is to be a leading university in the country and region in education, research and development, and service to the community by raising lettered individuals with universal ethical values. As a result, TIU has reached a level of continuous achievement on the regional and international stage in various international agencies’ rankings.

The SCImago Institutions Rankings (SIR) classification academic and research-related institutions ranked by a composite indicator that combines three different sets of indicators based on research performance, innovation outputs, and societal impact measured by their web visibility.

Developing an assessment tool for bibliometric analysis aimed to characterize research institutions involves an enormous data processing task related to the identification and disambiguation of institutions through the institutional affiliation of documents included in Scopus.

Indicators are divided into three groups intended to reflect institutions’ scientific, economic, and social characteristics. The SIR includes both size-dependent and size-independent indicators; that is, indicators influenced and not influenced by the size of the institutions. In this manner, the SIR provides overall statistics of the scientific publication and other institutions’ output while enabling comparisons between institutions of different sizes. It needs to be kept in mind that once the final indicator has been calculated out of the combination of the different indicators (a different weight has been assigned), the resulting values have been normalized on a scale of 0 to 100.

TIU’s Presidency admired this significant advancement and expressed gratitude and appreciation to our academic staff, who played a significant role in this accomplishment.

TIU intends to achieve more, and looks forward to establishing a brighter future. 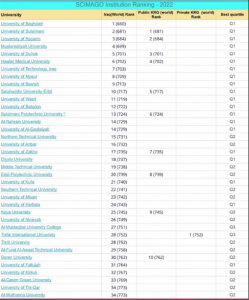